Today we are introducing a 50-year-old French beauty (and we’re not talking about a movie star): Sophie the Giraffe!

This year, she will have given half a century of happiness and teething relief to most French babies and increasingly, to many babies all over the world.  It makes a great baby shower gift that will give many hours of joy to baby and mother.

She was born on May 25th, 1961, the day of Saint Sophie – you can guess how she got her name!  In France, pretty much every child had or has one — it’s somewhat of a childhood right of passage.  The number of Sophie the Giraffes sold in France every year tracks very closely with France’s annual number of births.  It’s readily available and can be purchased at any supermarket for about half the price you can get it in the US.  Even so, it is worth purchasing it in the US if you can’t get it in France.  In fact, I always bring back a few “Sophie la Girafe” when I return from France but if my inventory runs out and I need another Sophie for a baby shower, I get it from Amazon.  It’s always a joy to hear many months after the baby shower how baby and mother love their Sophie and often accompanied with the comment that it the best toy they’ve ever received!  Now a bestseller on Amazon, Sophie did get a slow start in the US.  It all started in the early early 1990’s when a French mom, relocated in the US, was looking for a Sophie when her baby was born.  When she realized she could not find one, she saw an opportunity and approached a boutique in Beverly Hills.  The owner of that boutique put Sophie the Giraffe in baby baskets for movie stars whose babies soon fell in love with the cute Sophie (e.g. Goldie Hahn’s grandson, Nicole Richie’s daughter, etc.).  That sparked Sophie’s international fame in the US and almost 2 decades later, many adorable American babies blissfully chew on her.

Sophie is manufactured in the French Alpes and still follows a somewhat artisanal manufacturing process with 14 manual steps to ensure its beauty and safety (see video below).  She is soft like mother’s skin and made of 100% natural rubber (derived from the sap of the Hevea tree).  You can see from the picture below, she awakes all of a baby’s 5 senses.  She is the perfect size for small hands and her dark spots (made of food grade paints) are great visual stimulation.   When you squeeze her, she squeaks, which keeps babies amused for hours.  Babies love to chew on her ears and horns which is very soothing for their sore gums when they are teething.   Sophie’s long legs also reach far on the back of the baby’s mouth which is a blessing to provide relief for the back molars. 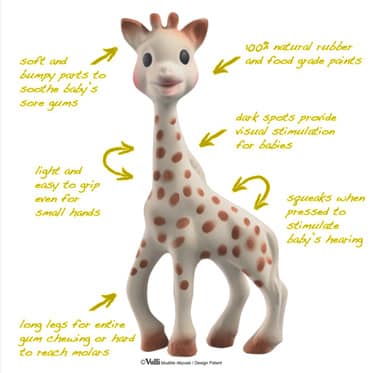 The video below gives a nice introduction to Sophie the Giraffe and shows how she is made in Rumilly, France (Haute-Savoie region in south-east France).  It even demonstrates a stress test to show that it is virtually indestructible.   From experience, however, I can tell you that she will melt, although still squeak, if left on a heater for an extended period of time!

Sophie is a great gift anytime for that special little one in your life.  You can have her delivered directly to your door step by purchasing it via Amazon.