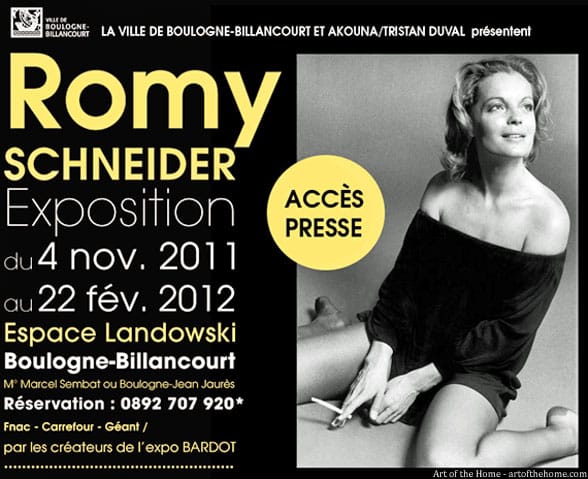 
The creators of the popular Brigitte Bardot expo last year are opening a new exhibition on another icon of French culture – Romy Schneider, one of France’s favorite actress (and Art of the Home too!).  It opens near Paris (in Boulogne-Billancourt) tomorrow so if you are in the Paris area over the next four months, consider jumping on the metro to meet or rediscover this legend.  This expo is a celebration of the talented actress Romy Schneider was but also the authentic woman she represents for many French women across generations.

And, as we are recognizing this legendary actress, our hearts think about Romy Schneider, the mother of David — the son she tragically lost and that she simply could not bear to survive.  So, today we wanted to share with you a touching montage of, not the magnificent actress she was, but the loving mother she was – the way she looks at her beloved son says it all!


Romy Schneider was born in Vienna, Austria, but she spent most of her adult life in France.  She would say:

If you would like to see some of her movies, there are so many great ones.  You may recall we reviewed just a couple of them for the Art of the Home soirée ciné (movie night): the love triangle “Cesar and Rosalie (César et Rosalie) and the thriller movie “The Swimming Pool” (La Piscine).

Here are the details of the exhibition for those blessed to be in Paris between November 2011 and February 2012 – Enjoy!


How do you get there? Métro Line 9 – Marcel Sembat