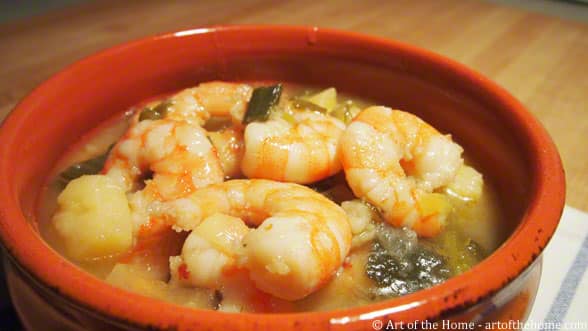 The “soupe du jour” today is a soup from the sea — a leek and potato shrimp soup (soupe de crevettes et poireaux-pommes de terre). Nowadays, shrimp can be found anywhere and you can find quality frozen shrimp at reasonable prices. But as common as they seem to be now, we like to serve them when we want to make a dinner just a little more special and not too often either. But you don’t necessarily need a reason for that “special shrimp dinner” – “just because” is good enough, and it will cheer everybody up. A leek and potato shrimp soup is perfect to serve as a healthy meal starter before a light main course or with baguette for a satisfying supper. The Art of the Home leek and potato shrimp soup recipe is loaded with the nutritious goodness of shrimp and leeks – a good dose of protein and vegetables included! And as always with soup, it slows you down so a soup before dinner is one way to help us eat slow and minimize overeating (you will not be that hungry anymore – and no appetite suppressant, this is just a natural process). I know it sounds like a broken record but a soup (or any small meal starter in fact) is such a miracle diet tool that we can’t help but point it out each time we offer a soup recipe.

Our leek and potato shrimp soup recipe is very easy to make and can conveniently be made ahead of time — before dinner, just warm up the soup (without the shrimp) and add the shrimp a couple minutes before removing from the heat. As long as you have frozen shrimp in your freezer (which can always come in handy for other recipes so it’s a good staple to have), all you need to do is add some leeks to your market basket and you can bring the taste of the sea to your table with this special soup in about 25 minutes. You can also of course get fresh shrimp at the fish market (à la poissonnerie) but frozen shrimp allow you to make this delicious soup whenever you feel like it and since the shrimp are swimming in a hot broth of leek and potatoes anyway- previously frozen shrimp are just fine. And frankly, we would rather pay premium for fresh shrimp when they are not served in a soup. So check below for the Art of the Home detailed leek and potato shrimp soup recipe and Art of the Home suggestions. Enjoy and bon appétit!