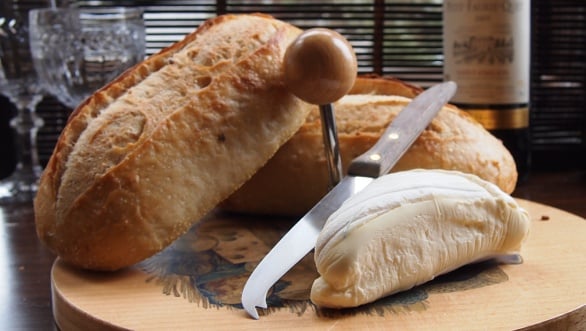 It’s hard to know exactly how many cheeses are produced in France, but it’s common to hear in France that there are as many cheeses as there are days in the year and likely many more. How delicious would it be to eat a different cheese every day! Today we are looking at a creamy French cheese available in the US: Fromager d’Affinois. Fromager d’Affinois is produced by the Guilloteau Fromagerie in Pélussin, France located in the Rhône-Alpes region.

You may want to consider Fromager d’Affinois as an alternative to serving Brie. Fromager d’Affinois is also a cow milk cheese but it is creamier than Brie. Considered a double cream cheese, its fat content is higher than Brie but it’s so worth it — even if you only take half a serving to stay reasonable! Best enjoyed with a red wine, Fromager d’Affinois is delicious on sliced baguette as an appetizer, as part of your cheese platter during a 5 course dinner or with bread after a soup for a light dinner. Bon appétit!!!